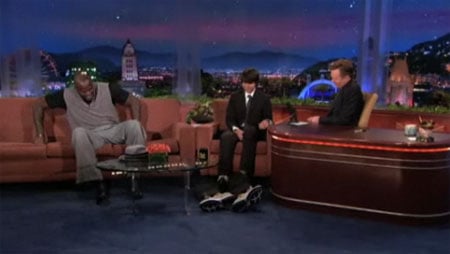 Demetri Martin appeared on The Tonight Show with Conan O'Brien last night to talk about his new film Taking Woodstock, based on the memoir by Elliot Tiber, the gay man who helped facilitate the legendary rock fest.

After describing the uncomfortable feeling he got after reading the first couple chapters and discovering he'd be playing a gay man, Martin discussed the horror he felt when he learned he'd have to kiss a man onscreen. Upon hearing that news, Shaquille O'Neal moved away from Martin on the sofa (above), eliciting gales of laughter from Conan and the audience. Here's my rough transcript: 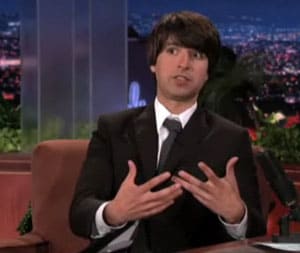 MARTIN: There's a scene in the movie where I have to kiss a guy, where I have to make out with this guy. (big laughter as Shaq moves away on couch) . Ang [Lee], the director said, listen, in that scene you have to kiss a girl first, and then you push her away, and then you kiss the guy. We can cast your girlfriend if you want….So the day comes, and I'm kind of dreading it but I'm like  my girlfriend will be there so that's cool. We do the first take. I kiss my girlfriend, I have to push  push her away. And then I have to go really make out with the guy in front of her. And I hadn't anticipated…

CONAN: The weirdness of doing this in front of your girlfriend.

MARTIN: And then, like eight takes later…we keep doing it over and over again. And it was weird cause it was like girlfriend, push her away, guy, oh yeah I want to kiss you, and then, okay girlfriend again…I had like 500 Altoids that night. I thought it would make a difference.

CONAN: It doesn't really, I know.

Previous Post: « Survivor Winner Richard Hatch: I Was Sent to Prison Because I’m Gay
Next Post: Dwight DeLee Gets 25 Years for Murder of Transgender NY Woman »