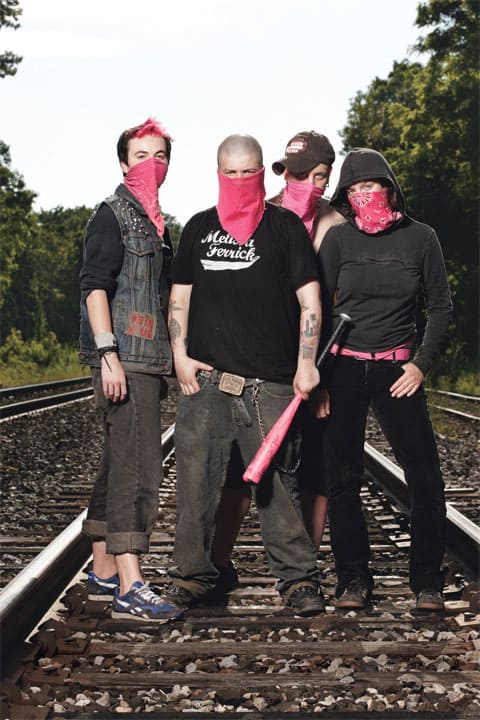 Bash Back gets a glamour shot in this month's Details. Photo by Danielle Levitt.

You may remember the incident in November in which the Lansing, Michigan-based chapter of the Bash Back anarchist group, angry over the church's repression of gays, held a demonstration at the Mt Hope Church in that city, "disrupting a service by pulling a fire alarm, dropping leaflets and yelling at parishioners."

There's a profile of the group in this month's Details: "Founded just over a year ago, the group adamantly opposes what it calls
the 'gender binary system,' which classifies people as either male or
female. Most members consider themselves neither or both. It's
anti-establishment, anti-military, and anti-marriage—for anyone. What
Bash Back! supports is gender self-determination, lots of sex and
pornography, and confrontation as a first resort—a necessary response
to violence."

The group's approach troubles gay rights groups. Sue Hyde of the NGLTF notes: "This looks too much like something I don't want to be involved with. Seeing weapons in the hands of gay folks in the U.S.? There's plenty
of hate in the world."