According to the New York Post, Ponzi mastermind Bernard Madoff is dying of cancer in prison, where he's taking part in Native American religious purification ceremonies held at an on-grounds "sweat lodge", and has aligned with a "homosexual posse": 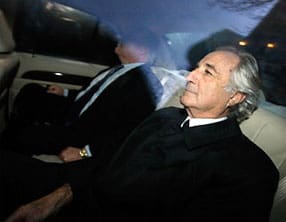 "It is unclear whether the 71-year-old Madoff checked out the ceremony because of health reasons. For centuries, Native Americans have used sweat lodges to help detoxify the body mentally, spiritually and physically.

Inmates who participate are usually shirtless, and Madoff was no exception earlier this month during the first ceremony he attended, according to the prisoners.

Madoff is also making new friends at the prison complex through another unlikely clique — the homosexual posse, although the relationships are purely platonic, according to the sources. 'In prison, you stick to your own kind, but he's doing the exact opposite by hanging with the Indians and [homosexuals] — so who is going to have his back?' wondered one jailbird.

Another inmate said various "gangs" at the prison are trying to recruit Bernie to their crews."

Madoff was sentenced to 150 years in prison in June after pleading guilty to cheating his clients out of $65 billion.