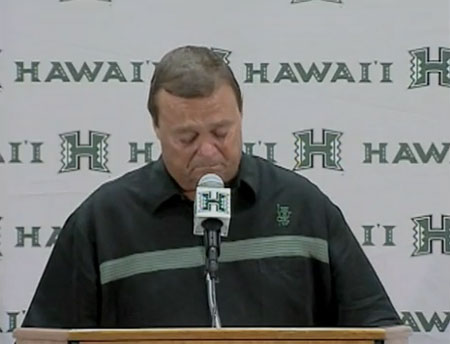 Hawaii football coach Greg McMackin, who used the word "faggots" in reference to Notre Dame players several times during a WAC press conference and then pleaded with the press not to cover it, has been given a 30 day suspension without pay and additional penalties:

"Officials say the coach's comments violated university policy, and as a result coach Mcmackin is being suspended without pay for 30 days.The coach has volunteered to work for free during the suspension.In addition to the 30 days of no pay, the coach will voluntarily take a 7 percent pay cut.He will also appear in a public service announcement. Based on the coach's million-dollar-a-year salary, 30-days of no-pay and a 7 percent cut takes more than 150,000 dollars from the coach…Part of the money saved from his suspension will pay for a student intern for the University's gay student services office. Mcmackin will also have to make presentations about the topic during student orientations, and work on awareness training for the athletics program."

McMackin broke down sobbing during a second apology, following his suspension.

A report on the suspension and a video of the coach's second apology, AFTER THE JUMP…