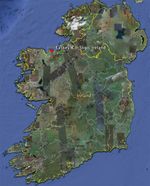 The small village of Easkey on the coast in County Sligo, Ireland, went "gay for a day" on Sunday, according to Irish Central:

"The local Family Resource Center of Easkey, population 250, is urging residents to 'go gay' in an act of support of the local LGBT community.

The village, which is best known as a surfing and fishing town and has just two shops, two pubs, two butchers and a post office, will host a reception in its Family Resource Center followed by a shoreside barbecue.

Organizers expect around 80 people from the community to attend, all of whom will wear pins proudly stating: 'gay for a day.'" 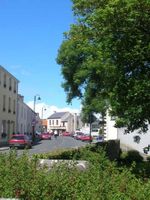 Said organizer and 10-year Easkey resident Denise Clarke, 48: "There is a trend now in Ireland where gay people are leaving the big cities and returning to their rural roots. It is no longer a necessity to run off to Dublin or London or Manchester to 'come out'. As a society we have moved on and are more broadminded and accepting. [When she first moved to the small seaside town of Easkey, she was ostracized and] "people were afraid of the new lesbian in town. One woman even rang around the local farmers to warn them that their wives could be in danger. It was just a lot of fear and some ignorance, but an event like this today helps dispel those myths and brings the townfolk together."

Meanwhile, in Dublin on Sunday, 5,000 took to the streets in support of marriage equality.

Previous Post: « Hillary Clinton: ‘My Husband is Not the Secretary of State. I am.’
Next Post: FIFA Told: Stop Homophobic Hate Graffiti from Serb Football Fans »