A group called 'The Pray in Jesus Name Project' (led by Chaplain Gordon James Klingenschmitt, below) has sent out an email to its followers warning them that the Obama health care plan will lead to a gay and transgender takeover of the health care system, The New Republic reports. 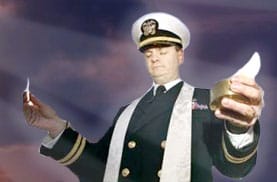 Specifically: "Your tax-dollars will pay for preferential hiring of homosexual hospital administrators, who distribute $50,000 grants to gender-confused activists for unneeded elective surgery to mutilate their own genitals, (and force Christian doctors to perform it.)"

TNR adds: "The group attempts to back this up by citing drafts of the House and Senate
bills that make fleeting references to gender and sexual orientation, but which
have nothing to do with mandated free sex-change operations."