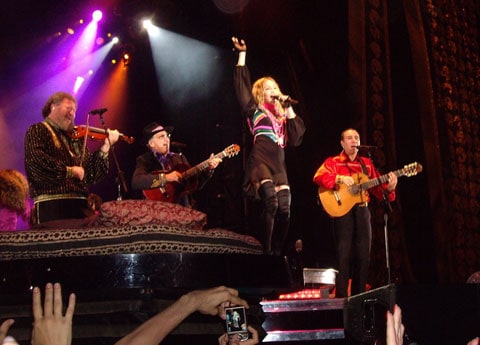 Madonna was reportedly booed during her Sticky & Sweet tour in Bucharest, Romania on Wednesday for telling fans to fight discrimination against gays and gypsies, the Romanian Times reports:

"She told them: 'I've never been to Romania before and I am happy to be here. ButI found out that there is a lot of discrimination against gypsies inEastern Europe and that makes me very sad, especially because webelieve in acceptance, gypsies, homosexuals, people that are different.Everyone must be treated the same, don't forget that!' But instead of the applause she expected fans jeered and booed the statement. Thereare over 500,000 gypsies officially registered in Romania but the realnumbers are expected to be much more as many have not declared theirethnicity in a country where they face widespread discrimination. They are Romania's most socially and economically disadvantaged minority, with high illiteracy levels."

Gays in Romania face violence from nationalist and ultra-orthodox groups. In recent years, marchers at gay rights rallies in Bucharest have been met by hundreds of protesters who hurl stones, eggs, tomatoes, and trash at them in an effort to break up the marches.