Officials are reporting that the Referendum 71 ballot measure pushed by anti-gay marriage foes has qualified for the November ballot in Washington State: 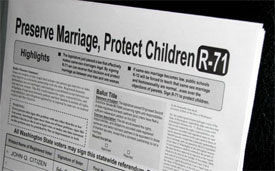 "The secretary of state's office said Monday that sponsors of Referendum 71 had 121,486 valid petition signatures – enough to put the newly expanded domestic partnership law to a public vote.A secondary check of rejected signatures was not complete, so the number could increase.The new law was supposed to take effect on July 26, but was delayed until the signature count was complete. Now, it won't take effect unless it is approved in the Nov. 3 election."

A "yes" vote on Referendum 71 on November's ballot would expand existing domestic partnership rights for gays and lesbians to offer all rights currently offered to married heterosexual couples.

A judge ruled last week that donors to Referendum 71 would be made public. Also, Washington Families Standing Together, a group opposing the repeal effort, has filed suit attempting to block certification of the measure, saying the Secretary of State failed to comply with the law. The court heard arguments today.

A video explaining the referendum process, AFTER THE JUMP…