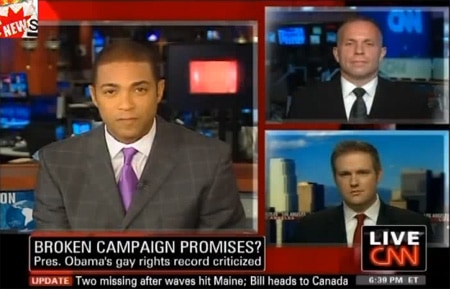 Not a lot of new ground covered here, but another reminder that the "fierce advocate" isn't living up to his campaign promises. Michelangelo Signorile and Log Cabin Republican spokesman Charles Moran debated agreed about Obama's gay rights positions on CNN today with anchor Don Lemon.

Moran had his opening statement ready to go: "The issue of being an advocate means you actually have to do something. And unfortunately all we've seen from the White House and the Obama administration is more rhetoric and not a lot of action. In fact the most we've gotten is a little bit of a circuit party with a Madonna remix in the East Room of the White House and unfortunately that just doesn't cut it."

Answered Lemon: "Okay, that's an interesting way of putting it."