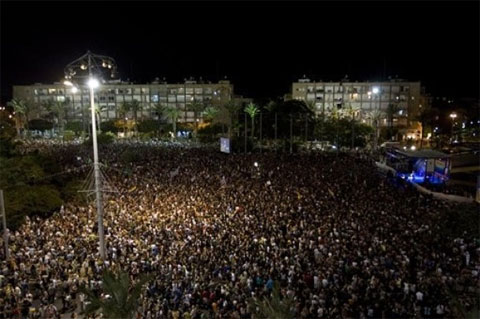 At least 25,000 and perhaps as many as 70,000 people gathered in Tel Aviv's Rabin Square this evening for a rally in solidarity with Israel's LGBT community in honor of the victims of last weekend's shooting at a gay youth center in the city. 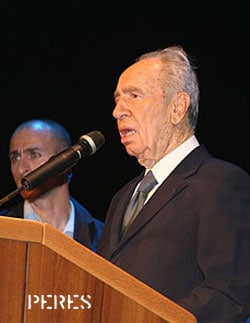 Said Peres: "The shots which struck this proud community affected us all as humanbeings, as Jews and as Israelis. The man who targeted the two victimstargeted all of us…Everyone has the right to be different and proud. Noone has the rightto interfere in other people's lives so long as everyone respects lawand order. I came to share your tears after the death of two young innocents. Be strong and courageous."

Nir Katz, 26, and Liz Trubeshi, 16, were killed in the shooting by a lone gunman, who injured 15 others.

The gunman is still at large. 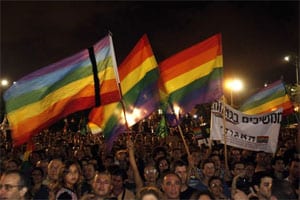 Two of those injured in the shooting spoke at tonight's rally: "Uri Gil, who was injured during theattack on the center, took the stage at the rally together with hisfriend Chen Langer and said, 'That place was a warm and loving home forthem and they met wonderful people there….This past week I have been haunted by nightly fear, especially whenI think that the murderer is walking around out there,' he added. 'Nomurderer will keep us in the closet.' Chen Langer, a youth counselor at the center who was also injured inthe attack, arrived in a wheelchair and spoke after Gil. 'This is theday in which we cease to be silent, to hide, and to alter theappearance of reality.' Langer tearfully added, 'The home that was a place of security for youths became a slaughterhouse of youths.'

Haaretz reports that threats were made before tonight's rally: "Earlier Saturday, a soldier in the Israel DefenseForces' Nahal Haredi unit was arrested on suspicion that he hadthreatened rally organizers on an online forum. While in custody, the soldier confessed to making the threats.Meanwhile, operators of transportation to the Tel Aviv rallyreceived telephone threats from an anonymous caller who warned thatgrenades will be hurled at attendants of the rally. "

Watch video of this evening's rally including a performance by popular gay Israeli pop star Ivri Lider, AFTER THE JUMP… 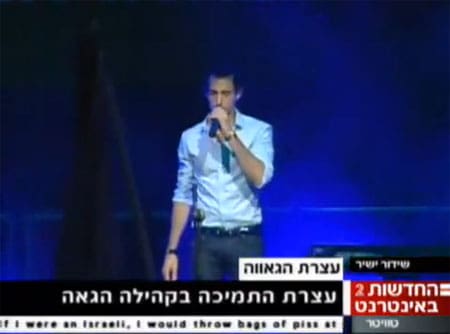