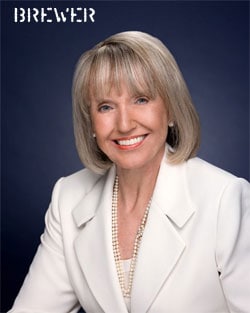 "A bill signed by Gov. Jan Brewer redefined a 'dependent,'
canceling the rule change made by Gov. Janet Napolitano that allowed
domestic partners to receive benefits. Also eliminated are children of domestic partners, full-time
students ages 23-24 and disabled adult dependents. The legislation is
in legal review. About 800 state employees are affected, according to the state's administration department…Liz Sawyer, a UA staff member, said the exclusion is 'deplorable and it's tragic.' Sawyer is a spokeswoman for OUTReach, a staff group that lobbies for domestic-partner benefits at UA. Last year 170 UA employees signed up for domestic-partner
benefits, she said. Forty were same-sex couples and the remainder were
unmarried, opposite-sex couples, she said."

Did God tell Brewer to do it?

"Gov. Jan Brewer said Wednesday that she believes 'God has placed
me in this powerful position as Arizona's governor' to help the state
weather its troubles. In a wide-ranging speech on the role of religion in politics and
in her life, Brewer detailed to a group of pastors of the Missouri
Synod of the Lutheran Church how she relies on her faith and in prayer
to deal with many of the issues she faces as the state's chief
executive. Brewer also said there are times when, during a meeting with
staffers, one will suggest praying about an issue. … But Brewer also said she recognizes the difference between bringing her faith to the office and having an 'agenda.' … 'The problem with having a political agenda is that we give the impression that we have God's truth,' the governor said. 'We think we can convert God's truth into a political platform, a
set of political issues, and that there is 'God's way' in our
politics,' Brewer continued. 'I don't believe that for a moment, any
more than you believe that God's way is exclusively the Lutheran way.' The governor said, though, she believes it is right — if not
inevitable — that elected officials bring their faith to their offices."