The White House is planning a public forum on its national strategy with regard to HIV/AIDS: 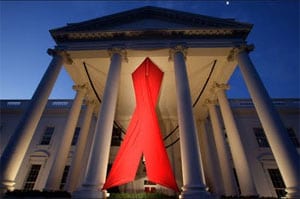 With more than 56,000 new HIV infections occurring in the United States each year, the President believes that we must re-focus national attention on the domestic epidemic. He has articulated three goals for the NHAS: reducing HIV incidence, increasing access to care and optimizing health outcomes, and reducing HIV-related health disparities. The national HIV/AIDS community discussions are just one mechanism for engaging the American people and obtaining input. The Presidential Advisory Council on HIV/AIDS (PACHA) will also provide input, and public comments submitted to the ONAP website will also be taken into consideration."

Dr. Shannon Hader, Director of DC Department of Health’s HIV/AIDS Administration, and
Wallace Corbett (Moderator), DC Ryan White Planning Council are participating at the discussion, which will be held at  The University of the District of Columbia Auditorium — building 46 on this map, on September 21 from 6-8 pm.

The discussion is open to the public, with an RSVP. Those interested can sign up here. The forum will be moving to other cities as well in the future — Albuquerque, NM, Columbia, SC, Ft. Lauderdale, FL, Houston, TX, Jackson, MS, Los Angeles, CA, Minneapolis, MN, New York, NY, Oakland, CA, Puerto Rico, San Francisco, CA, and Virgin Islands — but only D.C. has been scheduled thus far.

Previous Post: « Kanye West: I’m So Sure I’m Not Gay I’ll Stand Next to People Who Are
Next Post: Arizona Governor Takes Away State Domestic Partner Benefits
Says ‘God Has Placed Me in This Powerful Position’ »