Don Gorton is a Board Member of Join the Impact MA and former Chair of the Greater Boston Lesbian/Gay Political Alliance (1988-1994). 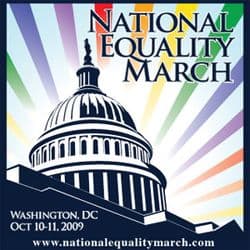 An Open Letter to Critics of the National Equality March

LGBT people are fortunate that the organized community is highlymobilized to preserve marriage equality in Maine. The cause of equalityin the 2009 elections is well-represented in the Pine Tree State byEquality Maine and the back-up of the Equality Federation. Everyoneacross the country should consider how they can help the No on 1campaign in Maine.

The National Equality March is one salutary means to advance thestruggle for equality in Maine and across the country. Yet some peoplehave pointed to the difficult Maine campaign to say, in effect, thatmobilization should shut down at the national level. More than a fewpillars of the LGBT  community have been running down the March sayingit diverts resources from Maine. Of course they overlook the fact thatthe activists being turned on by the exhilarating experience of a Marchon Washington wouldn’t otherwise be available to fight for equality.How much better off we would be if critics of the March took thepositive tack, doing everything possible to help out in Maine, ratherthan putting down the like-minded efforts of other equality-seekingtacticians.

Nothing in our collective struggle since 1969 has been moredispiriting than the need some gays have had to deprecate theinitiatives of others seeking  the same ends. The rage-filledexperience of the Gay Liberation Front in New York 1969-1971, whosemembers emotionally terrorized each other, cautions that one shouldcriticize other LGBT rights initiatives and activists only where therebuke will serve the greater good. Put-downs don’t do any good in anyrespect, in contrast to volunteering for Maine if that’s what you thinkshould happen.

I share the conviction that Maine is the top priority in the nearterm, especially for New England neighbors of the folks Down East. Evenso our movement needs to regenerate for the long-term. Movement 2.0that started with Proposition 8 and the movie Milk is real and isdrawing a new layer of activists into the struggle begun at Stonewall.These emerging Millennial Generation LGBT leaders will bring the dreamof equality in all 50 states to  fruition in this century.

In collaboration with our friends in Mass Equality, Join the ImpactMA aims to recruit a new wave of activists who can help out the No on 1campaign in the crucial final weeks. And win or lose in Maine, ourmovement will soldier forward toward the objective of full equality inall matters governed by civil law in all 50 states, as long as it takes.

Previous Post: « Meg Whitman: My Anti-Gay Marriage Stance is Not ‘a Slap in the Face’ to Gay and Lesbian People
Next Post: Obama Includes Same-Sex Parents in Family Day Proclamation »