In August, I posted about Navy veteran Joseph Rocha, who resigned from the military after experiencing hazing and harassment at the hands of his fellow soldiers.

Said Rocha: "My Navy peers often harassed me, insisting the extra training I didwith Marines was a search for sex partners. Once, I was hog tied to achair, rolled across the base, and left in a dog kennel with feces. Iwas forced to simulate sex acts, on camera, to armed service memberswith trained attack dogs in the room. Men with hoses sprayed me down infull uniform." 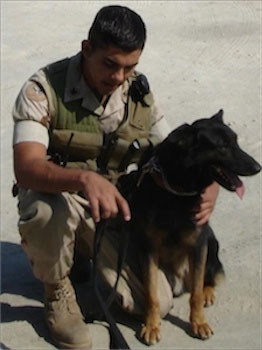 Youth Radio, (which posted an interview with Rocha at the time, AFTER THE JUMP…) continued to work on the story, and obtained documents and interviews that expose an epidemic of hazing at the Bahrain Working Dogs Division, where Rocha served.

Of particular interest is what happened to Rocha's unit Chief, Michael Toussaint: "Since the investigation, Michael Toussaint, Chief over the unitduring the abuse, was promoted to Senior Chief with the elite NavalSpecial Warfare Development Group in Dam Neck, Virginia. YouthRadio made several attempts to contact Toussaint directly and was toldby Special Warfare Command spokesman Major Sonny Leggett that Toussaintis in “austere locations” and unable to be reached."

Petty Officer Shaun Hogan says he regrets not having spoken up: "I was duty bound to protect those under my command; Petty OfficerRocha [and] several others. I have a lot of regret for not havingspoken up at the time and intervening… and the reason I didn't wasbecause I felt threatened myself. Chief Toussaint had shown he willthrow people out of the kennel. The last thing he did when he left wasthreaten me, that if he hears anything that doesn't agree with him, heknows people, and he'll seek to have my certification to handle dogsremoved."

Watch Rocha's interview from last month, AFTER THE JUMP…