Dino Boffo, editor of Avvenire, the newspaper of the Italian Bishops
Conference (CEI), has stepped down after Vittorio Feltri, the editor of Il
Giornale, a paper with ties to Italian Prime Minister Silvio Berlusconi, said he was gay and the subject of a sexual harassment lawsuit. 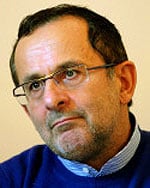 Said Boffo: "My life, the life of my family and that of my newsroom have been violated in an act of sacrilege I had never thought imaginable."

The Times reports: "Mr Feltri, who is leading an aggressive 'counteroffensive' to 'unmask'
critics of scandals in Mr Berlusconi's private life, had unearthed a 2004
incident in which Mr Boffo paid a fine for alleged telephone harassment of
the wife of an unnamed man whom Il Giornale claimed had been his gay
lover, adding that he was a homosexual 'known to the police for this
kind of activity'.
In Avvenire today Mr Boffo issued a detailed ten-point rebuttal of the
allegations. He admitted being fined in a harrassment case, but denied
suggestions of a homosexual relationship. The editor said he was resigning
because of the damage to his family and newspaper by Il Giornale."

Feltri's actions were apparently in response to criticism by Boffo of Berlusconi's "immoral" lifestyle: "Massimo D'Alema, an opposition leader and former Prime Minister, said
allegations that Mr Berlusconi had spent US election night last November
with Patrizia D'Addario, a prostitute who has given magistrates alleged
recordings of the encounter, were 'not gossip'."