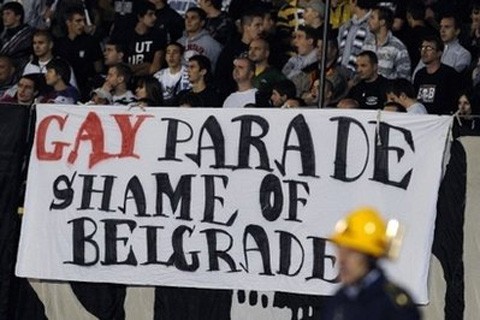 The Serbian government today cancelled what was to be the first Gay Pride in the nation's capital since 2001, citing safety concerns after nationalist and ultra-Orthodox groups threatened violence. Authorities had promised thousands of police officers would protect marchers, but today they backed down.

"A full security study was commissioned
more than three months ago by pride organizers and executed by the
university defense department constructing a detailed strategy for all
logistical possibilities to carry out pride safely with full
instructions for how police would secure pride participants entrance to
the parade, their safety during the event and their ability to leave
the event unmolested.

This security study also made detailed
recommendations for preventative measures that could be taken by police
in the months leading up to pride to minimize the risk of violence.
Police did not undertake these measures and despite months of meetings
with pride organizers and daily meetings in the past two weeks have
failed to act on security measures, instead choosing the tactic of
pressurizing organizers to cancel the event. In the last 48 hours
the police in meetings with pride organizers refused all cooperation
for the securing of the pride, applying further pressure to organizers
to cancel. Police refused to take responsibility for maintaining public
order during the event. Instead telling the Pride organizers that they
would be held responsible for any public damage caused by the hooligans
and fascist groups who have been organizing a violent response to Pride." 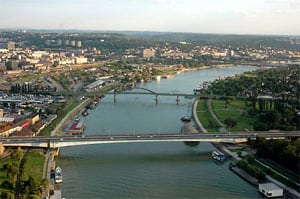 Anti-gay forces rejoiced over the cancellation:

"The ultra-nationalist Serb Popular Movement 1389 hailed the cancellation of the march as 'a great victory for normal Serbia.' The
group said it would be going ahead with its own demonstration planned
at the philosophy faculty at 8:00 am (0600 GMT), three hours before the
Gay Pride would have begun, for a 'non-violent and non-deviant popular
Serb rally.' … 'In our city, infidels and Satanists will not pass,' it added…Belgrade Pride organisers had also called on the Serbian Orthodox
Church to make an appeal for calm. But the Church said it could not
accept the event, calling it a 'Shame Parade, Parade of Sodom and
Gomorrah'. Ultra-nationalist group, Nasi (Ours), warned that 'European Union and American leaders who support (homosexuals) should
know that as long as there are Orthodox Serbs there will be no
homosexual parade in Serbia.'"

Police offered alternative locations on the edge of town. March organizers called them "unacceptable", and said Serbia's "test of democracy" failed: "The state has failed the fundamental test. The next exam period is approaching fast. The Republic of Serbia has
capitulated. We have not."