David Mixner says he must: 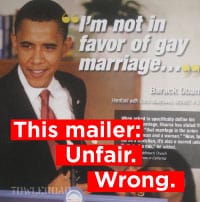 "If the president doesn't want his own words to be used in a hate-filled
campaign then he better speak up now. We all remember what happened in
California. Even though Obama opposed Proposition 8, his profile on the
initiative was very low. As a result, the YES on 8 folks did mass
mailings using Obama's own words against marriage equality to imply
that he supported the divisive measure. Many liberals and
African-Americans were confused and voted 'YES ON 8' as a result of
those mailings and ads. Let's not let that happen again. To avoid a reoccurrence of that disaster, the president should
immediately, strongly and unequivocally oppose the proposition in
Maine. He should denounce the efforts of the right-wing to put human
rights on the ballot to be voted upon as if it was just another measure
for the voters. The president must not mince words or be tepid in his
support or once again go into his belief that marriage is between a man
and a woman. We got that, Mr. President. Time to come down without
clever political language for full equality for the LGBT community."

Help protect marriage equality in Maine at 'Vote No on 1'.