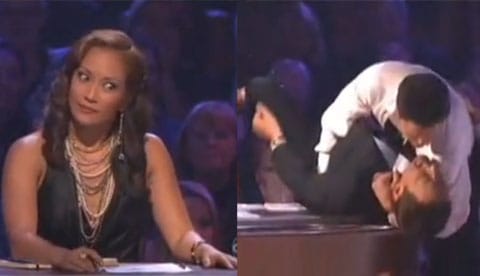 Last night on Dancing with the Stars, Donny Osmond felt it necessary to stage a theatrical make-out scene with judge Bruno Tonioli after Bruno accused his Rumba to be "airy fairy".

Following the "kiss", Osmond said, "I don't think they're going to let me back in Utah anymore."

Donny Osmond says he condemns homophobia and opposes same-sex marriage. Which, of course, is an expression of homophobia.

Watch the Mormon make-out session, AFTER THE JUMP…