As I mentioned last week, today D.C. Councilman David Catania will introduce a bill to legalize same-sex marriage in the District of Columbia. The bill is expected to pass easily, however, Congress can overturn District legislation under Home Rule. The Washington Post reports that is unlikely to happen: 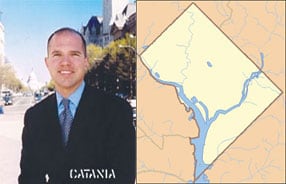 "In an interview, Del. Eleanor Holmes Norton (D-D.C.) said she had
received assurances from House Democratic leaders that she doesn't need
to worry about congressional intervention. 'The House and Senate have their plates really full,' Norton said. 'I don't think this is anything that is going to somehow scramble over
into that.' Rep. Jason Chaffetz (R-Utah), who tried to derail a bill passed by
the council this year recognizing same-sex marriages performed
elsewhere, also expressed doubts that he or other Republicans could be
major obstacles. 'Given the gravity of health care and other tumultuous debate, it
hasn't got much attention,' said Chaffetz, the ranking member of the
House subcommittee that oversees the District."

How the issue will fare down the road is another question:

"…even if same-sex couples start marrying next year, the long-term
survival of the practice would be in doubt for years, depending on the
makeup of the House and Senate, congressional officials said.
"

Previous Post: « Donny Osmond: Utah Won’t Allow Me Back After Gay Kiss
Next Post: Talan Torriero and Brian Drolet: If They Were Gay »