The Nobel Committee has awarded its 2009 Nobel Peace Prize to Barack Obama: 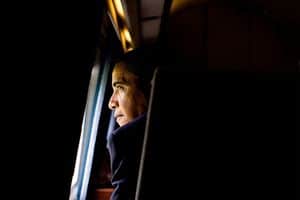 "[The President won the prize for] 'extraordinary efforts to strengthen international diplomacy and
cooperation between peoples,' especially his work to reach out to the
Muslim world and to eliminate nuclear weapons around the globe."

The WaPo reports: "The announcement, less than nine months after Obama took office,
sparked immediate questions from reporters in Oslo about whether the
Nobel committee was acting prematurely in rewarding a world leader who
has outlined a lofty and ambitious agenda but has not yet made many
concrete steps toward realizing it. But Thorbjoern Jagland, chairman of the five-member Nobel committee,
said 'we have not given the prize for what may happen in the future. We
are awarding Obama for what he has done in the past year. And we are
hoping this may contribute a little bit for what he is trying to do.' In making the announcement, the committee said Obama has "created a
new climate in international politics. Multilateral diplomacy has
regained a central position, with emphasis on the role that the United
Nations and other international institutions can play."

The committee specifically cited Obama's speech about Islam in Cairo. The White House was not notified about the award before the 5 am announcement and has not commented.

UPDATE: RedState has smeared the choice as "an affirmative action quota."