A 500-year-old fingerprint thought to be that of Leonardo da Vinci's has caused the potential value of a painting of a young woman to skyrocket: 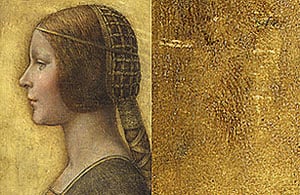 "The 13-by-9-inch portrait, which is now being dubbed La Bella Principessa,
is a delicate profile of a young aristocratic Milanese woman, drawn
with pen, chalk and ink on an animal skin known as vellum. It was
bought two years ago by an anonymous Swiss collector at the Ganz
Gallery in New York for around $19,000. Experts now put the possible
value of the artwork at upwards of $150 million. The potential fingerprint wasn't a total surprise to everyone, though.
Alessandro Vezzosi, a noted Da Vinci scholar, stuck out his academic
neck last year when he identified the portrait as one of the artist's
in his 2008 book, Leonardo Infinito. He based his conclusion
on artistic, stylistic and historic considerations. 'There is some
embarrassment out there,' said Vezzosi, director of the Leonardo Da
Vinci Museum in the artist's hometown of Vinci, Italy. 'Just looking at
it, you know it isn't German.'"