Yesterday I mentioned that the group The Foundation for Reconciliation is to hold a memorial during the Church of LDS conference this weekend for gay Mormons who have committed suicide: 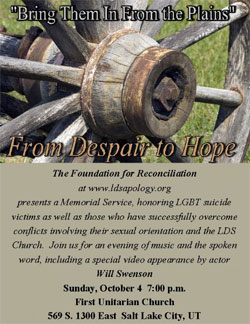 "The foundation, in a news
release, said it wanted to call attention to the issue in light of the
LDS Church's 2008 support for the gay marriage ban in California, the
July detention of a gay couple who kissed on the church's Main Street
Plaza and a September speech given by LDS general authority Bruce C.
Hafen denying a biological link to homosexuality."

Today, the Salt Lake Tribune reports that the Deseret News rejected an ad for the service:

"MediaOne, which handles advertising for both the News and The Salt Lake Tribune ,
accepted payment from the nonprofit Foundation for Reconciliation to
run an ad, announcing a memorial service this Sunday, in both papers.
But on Wednesday, a MediaOne employee told the group's Cheryl Nunn that
the ad had been rejected by the News. 'Anything that's related to the church we have been asked to present that to [the Deseret News ]
and then they decide,' said MediaOne President Brent Low. 'This one was
directly talking about the church and sexual orientation.' Without receiving the discount offered from advertising in both papers, the group asked to pull the blurb from the Tribune , as well, and received a full refund, Low said."