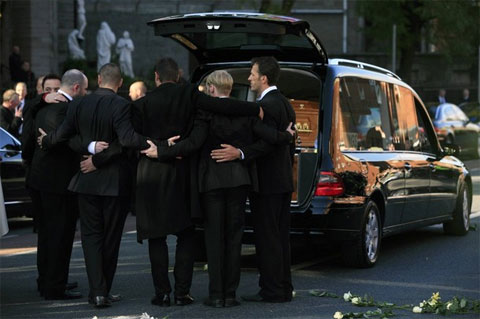 Watch a video, AFTER THE JUMP… 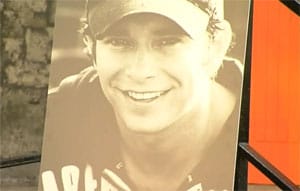 The Guardian reports: "After Gately's coffin was carried out of the church, the survivingmembers of Boyzone stood behind the hearse in a silent group, huddledfor a few minutes' reflection while local women and children showeredthem and the hearse with dozens of white roses. As the funeralcortege made its way up Seville Place, flanked by five garda motorbikeoutriders, a train on the railway bridge over the street suddenlyhalted while thousands all around clapped and cheered. Among thecelebrities who attended the funeral were the band's founder andX-Factor judge Louis Walsh, David Furnish, Shane Ward, Jason Donovan,Brian McFadden and Vanessa Feltz. Messages of condolence were sent byDavid and Victoria Beckham and Elton John, among others. When theGately family, friends and the celebrities he knew and worked with hadgone, five photographs of the singer at various stages of his life wereleft behind inside the church, and one of him together with the rest ofBoyzone. Gately was later cremated after a short service at Dublin's Glasnevin cemetery." 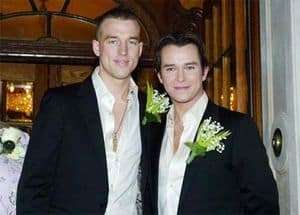 An autopsy reported that Gately had died of natural causes. There was widespread criticism this week over a homophobic Daily Mail column by Jan Moir which used rumors surrounding Gately's death to slam the gay "lifestyle" and the "happy-ever-after myth of civil partnerships".

Gately married Andy Cowles in March 2006 in one of the first high-profile same-sex civil partnerships after they became legal in the UK.

Today, tabloid News of the World released video of the night Gately died showing the singer and Cowles leaving a nightclub in Majorca. The video appears to contradict reports that Gately had been on a drinking binge.

Watch a report on the funeral, featuring clips of Boyzone singing at the church service and Ronan Keating reading an emotional memorial, AFTER THE JUMP…