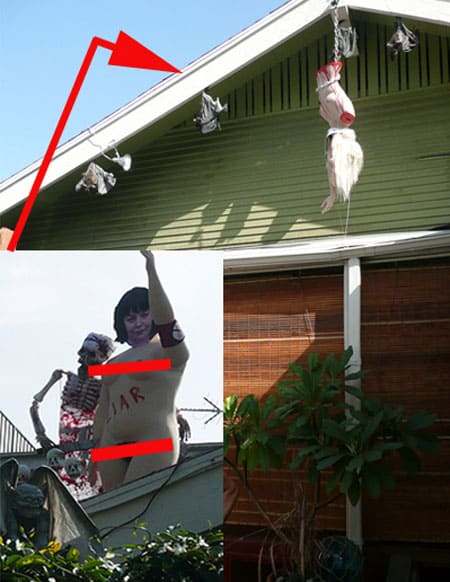 Gallagher is nude and Prejean is, well, in bloody pieces. 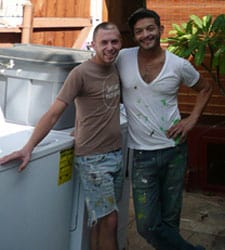 "More about what’s on the roof this year, according to the pair, who
work in the window display business: As noted, there’s a mannequin with
a photo of Gallager, President of the Institute for Marriage and Public Policy (And NOM),
an organization that opposes gay marriage. She’s also has the word liar
written on her stomach. 'The reason that she is naked is that we are
exposing her lies,' says Morrissette, who calls her a hypocrite for
statements he says that she made about educating children about gay
marriage. Glinda, the good witch, is also on the roof, standing next to a
Mormon missionary (he's stuck in a chimney and on fire). Glinda is
there to counteract all the evil of the rest of the
characters….including Carrie Prejean, the Miss USA 2009 contestant.
She's the gal who said she believed that marriage should be between a
man and a woman–and she's shown chopped in half and bloodied. Prejean is a 'victim of Gallagher's,' according to Morrissette,
because he says her image has been used by the Institute for Marriage
and Public Policy. Still, Morrissette said he 'doesn’t know how
entrenched' Prejean is with Gallagher's group."

Is it effective to fight homophobia with violent misogyny (even if "it's Halloween," as the couple tries to explain). Don't think so.

Major FAIL here in a desperate bid for attention, once again.