Paris Foot Gay, a Paris-based football club composed of gay men and  "heterosexuals, blacks, whites, north Africans, and several different religions" according to its co-founder and current president Pascal Brethes, was refused a match by Bebel, a mostly-Muslim team, because of its gay players, Agence France Presse reports: 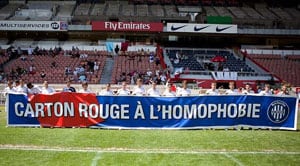 "PFG said they received an e-mail from Bebel which said they could
not honour the match because it was 'against their principles'. … 'Sorry,
but because of the name of your team and in keeping with the principles
of the team, which is a team of practising Muslims, we cannot play
against you,' said the e-mail, according to Brethes. It added: 'Our convictions are stronger than a game of football. Sorry to have informed you so late.' PFG
believe the decision was 'homophobic', and have threatened to press
charges 'if Bebel continue to carry on like this', according to Brethes. He
said his team was a haven for all kinds of races and also welcomed
non-gay players, and he believes Bebel's decision contravenes laws
governing racism and homophobia."