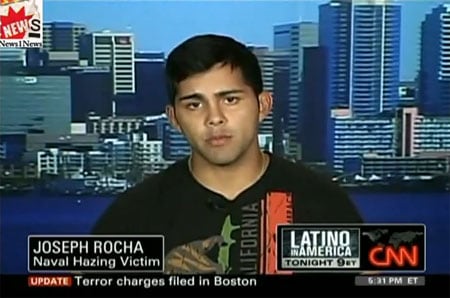 I've been periodically posting about the case of Petty Officer 3rd Class Joseph Rocha (below), and the hazing he experienced while serving under Michael Toussaint, his unit chief in Bahrain. 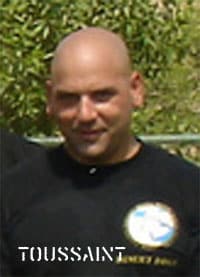 Said Rocha of the hazing: "My Navy peers often harassed me, insisting the extra training I didwith Marines was a search for sex partners. Once, I was hog tied to achair, rolled across the base, and left in a dog kennel with feces. Iwas forced to simulate sex acts, on camera, to armed service memberswith trained attack dogs in the room. Men with hoses sprayed me down infull uniform."

"Toussaint, a dog handler assigned to Naval Special Warfare Group 2 in Virginia Beach, has also received a letter of censure from the Secretary of the Navy. The letter will become part of his permanent military record, said Cmdr. Elissa Smith, a Navy spokeswoman at the Pentagon.Smith said Adm. Gary Roughead, the chief of naval operations, canceled Toussaint’s enlistment extension, which will force him to leave active duty and retire in January. He won’t necessarily be able to retire as a senior chief: Navy officials ordered that he be subject to 'retirement pay grade determination,' in which the secretary of the Navy will decide at what pay grade he may retire. Smith could not speculate on what that might mean, except to say that it 'has the potential to significantly impact Senior Chief Toussaint's retirement pay.'The announcement follows Roughead’s decision last month to re-examine the handling of an investigation into hazing and abusive behavior at a Navy dog-handling unit in Bahrain in 2005 and 2006. Toussaint commanded the dog handlers and kennel until March 2006."

Rocha appeared on CNN late today to discuss the announcement. Watch, AFTER THE JUMP…