Despite a plea from Senator John Kerry, Attorney General Eric Holder has refused to act in the asylum case of Genesio "Junior" Oliveira, who requested asylum in the U.S. in 2002. In
2005, he was married in Massachusetts to his husband Tim Coco, but the
couple have been separated since 2007 when Oliveira was sent back to
Brazil after his asylum requests and appeals were denied. 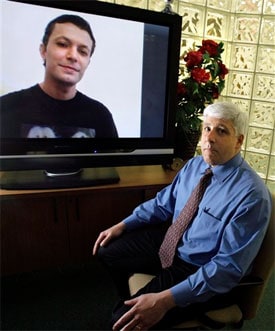 In March, Kerry came to the aid of the couple, who would normally have no problem in this situation. But, because of the Defense of Marriage Act, the U.S. does not recognize immigrants who marry U.S. citizens in a same-sex marriage.

Holder's response in this case has been silence, the AP reports:

"Tim Coco said Attorney General Eric Holder did not act on a Friday deadline in the case of Genesio 'Junior' Oliveira, effectively denying the 30-year-old Brazilian man's request for asylum in the U.S. on humanitarian grounds.

"We needed the Attorney General to make a decision on whether Junior could come home," said Coco, 48, of Haverhill. 'He didn't take this request seriously.'

The Justice Department did not immediately return messages…Kerry spokeswoman Brigid O'Rourke said Monday that the senator will continue to work toward a solution that would reunite the couple for good. 'The fact is that if Tim and Junior were a heterosexual married couple, they would never have suffered through more than two years of separation,' said O'Rourke.

Coco said he thought there was "no way" the Obama Administration would deny Oliveira's asylum request after Kerry made his plea to Holder.' We are profoundly sad,' said Coco. 'This is more than any married should have to face.'"

Cases like these are why the Uniting American Families Act,
which was reintroduced in February, is so important. As well, of course,
as the repeal of DOMA which prevents the federal government from
recognizing anything other than a heterosexual marriage.

The UAFA has since been added to a larger comprehensive immigration reform bill. Senator Gillibrand spoke about it briefly in answer to a question at her forum over the weekend, and stressed that the immigration reform legislation must be introduced and passed before the Spring.