Ten days ago, after prodding from The Advocate's Kerry Eleveld, the Obama administration released a statement clarifying its position on anti-gay ballot initiatives, such as Question 1 in Maine and Referendum 71 in Washington state. 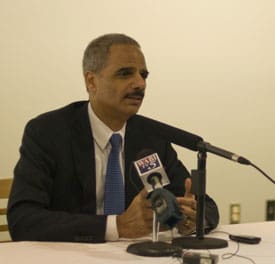 Said the White House statement:
"The President has long opposed divisive and discriminatory efforts to
deny rights and benefits to same-sex couples, and as he said at the
Human Rights Campaign dinner, he believes ‘strongly in stopping laws
designed to take rights away.’ Also at the dinner, he said he supports,
‘ensuring that committed gay couples have the same rights and
responsibilities afforded to any married couple in this country.’"

After appearing at a lecture series at the University of Maine where his opinion would have been heard by many Mainers perhaps undecided on how to vote, Attorney General Eric Holder could have offered a stronger position, or at least an equal one, on the same issue.

Instead, he offered a weaker one: “[The president and I] are of the view it is for states to make these
decisions. That federal law [DOMA] is not necessarily a good piece of
legislation, and we are going to work to repeal it."