An effort to recall Portland Mayor Sam Adams fell short yesterday, as the 'Community to Recall Sam Adams' failed to turn in the required 32,000 signatures to place a recall on the ballot. They're not stopping, however: 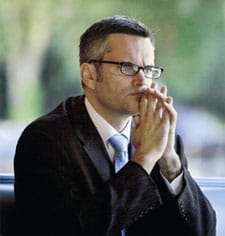 "They said they planned to use what they have so far to create a
database for the next campaign, rather than submitting them to
elections officials. Jasun Wurster started the recall campaign after Adams admitted to lying
about his sexual relationship with a former legislative intern who was
a teenager at the time…After failing to collect enough signatures for a recall, Wurster on
Monday said a political action committee called Portland Future PAC has
been formed with promises from some business leaders for about $150,000
to pay for a new recall campaign. 'It should be only a week or
two to secure those commitments and get them filed with the state, and
get those checks entered into our bank account,' Wurster said. 'Then we
will launch the new recall.' Wurster declined to say who was
contributing until the checks are cashed, partly 'so Adams doesn’t have
a chance to go back behind and undermine commitments.'"