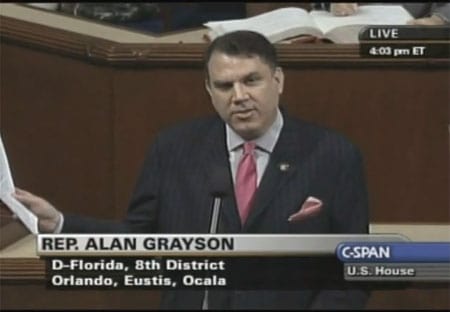 Rep. Alan Grayson, who Tuesday night gave a floor speech during which he unveiled a mock GOP Health Care plan that advised patients to not get sick, and "die quickly", late yesterday gave Republicans the apology, but not the one they were seeking.

Said Grayson: "I’m not going to recount every single thing that I said, but I willpoint out that immediately after that speech, several Republicans askedme to apologize. Well, I would like to apologize. I would like toapologize to the dead. And here’s why. According to this study, 'HealthInsurance and Mortality in U.S. Adults' which was published two weeksago, 44,789 Americans die every year because they have no healthinsurance."

Grayson also appeared on CNN's The Situation Room and called the Republicans "knuckle-dragging Neanderthals". Grayson also stopped by for a visit with Rachel Maddow.

Watch all, AFTER THE JUMP…