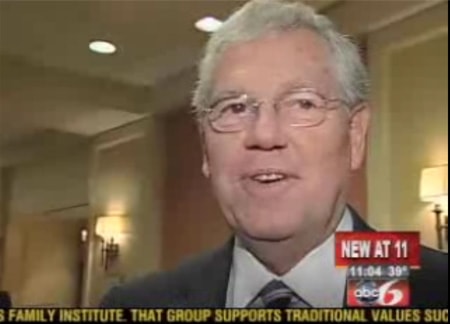 Rhode Island Governor Donald Carcieri crossed state lines last night to deliver a speech about "traditional marriage" to the Massachusetts Family Institute. In September, gay groups had asked Carcieri to cancel the appearance. Here's what the MFI says about gays on its website:

"MFI does not consider homosexual behavior to be merely an alternate lifestyle or sexual 'preference'; it is an unhealthy practice and destructive to individuals, families and society. Our compassion for those plagued by same-sex attraction compels us to support the healing of those who wish to change their behavior. MFI strongly opposes any efforts by political activists to normalize homosexual behavior and all attempts to equate homosexuality with benign characteristics such as skin color, or the 'gay rights' movement with the civil rights movement."

The MFI did everything they could to enact a ban on same-sex marriage in Massachusetts in 2007, and failed.

Carcieri, who is also a strong supporter of the National Organization for Marriage (NOM), told the crowd of more than 300 that marriage is "not a civil right". Said the governor: "It is a not civilright. I get aggravated when it is portrayed that way. Marriage is a license by the state. It is about a state’sresponsibility, which is the reason why states don’t allow a lot oftypes of marriages."

The Providence Journal reports: "The protestersoutside were from a variety of Rhode Island gay-rights advocacy groupsincluding Queer Action Rhode Island, which in August called on thegovernor to cancel his appearance. They said his decision tospeak before the Massachusetts Family Institute, which had beenconfirmed more than a month ago, sends a 'bad message' to RhodeIslanders as the state weighs the issue of same-sex marriage…Said SusanHeroux, a member of Queer Action RI, 'They go way beyond opposition togay marriage. In their far-out views, they think [homosexuality] is adisease that we can be cured of. … It feels like they’re trying toeradicate us.'"

Carcieri has agreed to meet with gay groups face-to-face in early November to discuss his position on a variety of isues.

Watch an ABC6 report on Carcieri's speech to the MFI, AFTER THE JUMP…