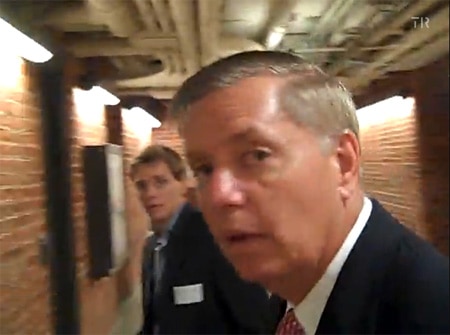 Senator Lindsey Graham (R-SC) was asked about rumors he is gay by Mike Stark of The Crooked Dope.

Writes Stark: "At Justice Sotomayor’s confirmation hearings, Senator Lindsey Graham asked her about anonymous comments offered by a range of lawyers. These comments were negative, mostly having to do with the Justice’s temperament. Leaving aside the fact that Justice Scalia’s acidic demeanor never seemed to bother any of the white male Senators called upon to confirm him, I did think it was notable to ask a nominated Justice to comment on accusations made by anonymous accusers. I especially found it interesting because there is no shortage of rumors regarding Senator Graham’s sexual orientation. That puts Graham in almost the same position Justice Sotomayor except nobody that I know of has asked Senator Graham to respond to the rumors. What’s more, if Graham did have gay relations while a member of the military, he broke the law."

After his question is brushed off, Stark says to Graham, "I'm guessing that after a long career in the military, you're not going to dignify any of these rumors with any kind of comment."

Asked about DADT, Graham replies, "I want to see what the military says."