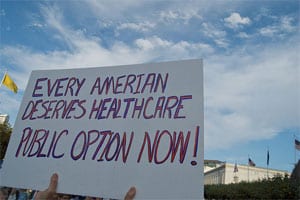 "Senate Democrats have begun discussions on a compromise approach to
health care reform that would establish a robust, national public
option for insurance coverage but give individual states the right to
opt out of the program. The proposal is envisioned as a means of getting the necessary
support from progressive members of the Democratic Caucus — who have
insisted that a government-run insurance option remain in the bill —
and conservative Democrats who are worried about what a public plan
would mean for insurers in their states…But instead of starting with no national public option and giving
state governments the right to develop their own, the newest compromise
approaches the issue from the opposite direction: beginning with a
national public option and giving state governments the right not to
have one. 'It is being discussed,' said one progressive strategist who has
been working on reform with both the White House and Congress. 'In the
end obviously, the goal and near-term exercise is to get to the
bargaining table and get to the conference committee between the Senate
and House with the strongest position [on the public plan] possible.'"