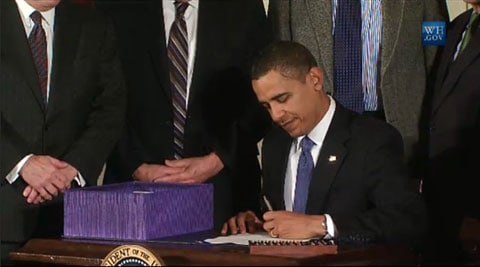 After remarks on the Department of Defense authorization bill, President Barack Obama moments ago recognized Judy and Dennis Shepard and the family of the late Senator Ted Kennedy before signing the bill, which contains the MatthewShepard & James Byrd, Jr. Hates Crimes Prevention Bill, into law.

Said Obama: "Now, speaking of that, there is one more long-awaited change contained within this legislation that I'll be talking about a little more later today. After more than a decade of opposition and delay, we've passed inclusive hate crimes legislation to help protect our citizens from violence based on what they look like, who they love, how they pray, or who they are. I promised Judy Shepard, when she saw me in the Oval Office, that this day would come, and I'm glad that she and her husband Dennis could join us for this event. I'm also honored to have the family of the late Senator Ted Kennedy, who fought so hard for this legislation. And Vicki and Patrick, Kara, everybody who's here, I just want you all to know how proud we are of the work that Ted did to help this day — make this day possible. So — and thank you for joining us here today. (Applause.) So, with that, I'm going to sign this piece of legislation."

Watch his remarks and read a statement from Judy Shepard, AFTER THE JUMP…

Check back HERE at 6:00 pm for a livestream of Obama's remarks on the hate crimes law.

“When Dennis and I started calling 10 years ago for federal action to prevent and properly prosecute hate crimes against gay, lesbian and transgendered Americans, we never imagined it would take this long,” said Judy Shepard, Matthew’s mother and the president of the Matthew Shepard Foundation Board of Directors.

“The legislation went through so many versions and so many votes that we had to constantly keep our hopes in check to keep from getting discouraged,” she continued. “But with President Obama’s support and the continually growing bipartisan majorities in the House and Senate lining up behind the bill this year, it became clear that 2009 was the year it would finally happen.”

The legislation allows federal authorities to pursue charges in violent crimes motivated by the victim’s actual or perceived sexual orientation, gender, gender identity and disability, in cases where local authorities cannot or will not secure appropriate convictions. It also opens up federal aid to local law enforcement for training, prevention and investigation.

“We are incredibly grateful to Congress and the president for taking this step forward on behalf of hate crime victims and their families, especially given the continuing attacks on people simply for living their lives openly and honestly,” Shepard added. “But each of us can and must do much more to ensure true equality for all Americans.”

The Matthew Shepard Foundation’s work for an inclusive society continues after passage of this landmark legislation. In addition to advocating for workplace and housing equality, equal rights for same-sex couples, and an end to the ban on gay and lesbian military service, the Foundation continues to reach out to schools and corporations nationwide to encourage respect for human dignity and differences.