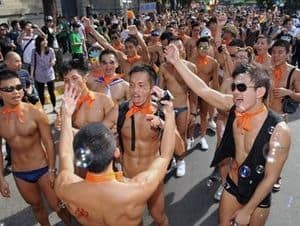 "Rainbow flags, balloons and placards were in abundance as participants gathered in a square outside the presidential office, with dress varying from period costumes to swimming trunks.' I hope the government will not only legalise same-sex unions but also allow us to adopt children,' said Nancy Chen, who pushed a stroller to highlight her call.

But Chen admitted that 'it would take a few more years' for the general public to accept the idea before the legislation process can begin.' Even though Taiwan is becoming more open-minded towards gays, many still think that gay people can have romantic relationships but not something as serious as starting families,' she said.

Taiwan's cabinet in 2003 drafted a controversial bill to legalise same-sex marriages and recognise the rights of homosexual couples to adopt children, the first in Asia to do so.

However, the law has yet to be passed and some gay groups have criticised the bill as a ploy to woo voters."

About 1,000 turned out in Hong Kong for Gay Pride over the weekend as well.