The recent victory of bigots in Maine has cause some anti-gay lawmakers in New Hampshire to consider a repeal of that state's marriage equality law, which was signed by Governor John Lynch in June. 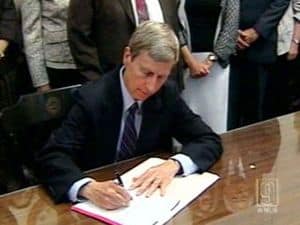 "Two proposals are being drafted in the N.H. House: One would repeal the law Gov. John Lynch signed in June and re-establish civil unions; the other is a constitutional amendment that would charge voters with deciding if 'the state shall only recognize the union of one man and one woman as marriage.'

Supporters of same-sex marriage are strategizing and gearing up for a fight, said Rep. Jim Splaine, D-Portsmouth, who sponsored the gay marriage law. He said momentum doesn't rest with gay-marriage foes.' The momentum is on our side and those of us who support equality and love over hate,' he said Wednesday.

Even so, 'we have a fight cut out for us in January' when the Legislature reconvenes, he said. 'But I think virtually everyone in the House and Senate who voted for marriage equality will stick with us and I'm hoping we'll pick up some others.'"

According to the paper, "Only the proposed repeal would go to the governor's desk in order for
it to become law. Constitutional amendments head straight to the voters
for two-thirds support upon being passed by the same margin in the
Legislature."