Ian McKellen, in New York to promote an AMC movie called The Prisoner, gave a typically eloquent and enlightened interview to the L.A. Times. Hopefully he's not thinking about leaving us anytime soon, but it's apparent mortality is on his mind. 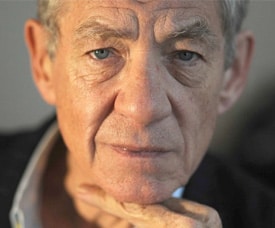 Said the actor: "When I've been asked what should be on my gravestone…I've
said: 'Here lies Gandalf. He came out.' Two big achievements."

Said McKellen about religion: "I increasingly see organized religion as actually my enemy. They treat
me as their enemy. Not all Christians, of course. Not all Jews, not all Muslims. But the
leaders. . . . Why should I take the judgment of a declared celibate
about my sexual needs? He's basing his judgment on laws that would fit
life in the Bronze Age. So if I'm lost to God, organized religion is to
blame."

He also talks about actors who make a deal with the devil to stay in the closet.

"The conventional wisdom is that if you are gay, you cannot play the
romantic straight lead in a movie. They'd rather have 'don't
ask, don't tell.' The proposition from Mephistopheles as you sign the
agreement that you will become a Hollywood star is that you will lie
about yourself. That's selling your soul. This business may involve
disguise, but it's about telling the truth. And I don't think a
closeted actor in this day and age can act as well as an actor who is
out."