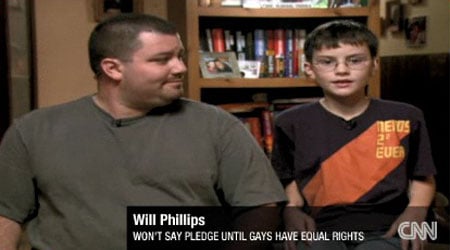 Last week I mentioned Will Phillips, the 10-year-old Arkansan who has refused to say the Pledge of Allegiance until gays and lesbians have equal rights. CNN's John Roberts asks Phillips why the issue is so important to him.

Roberts also asks Phillips what he said to the teacher after refusing to say the Pledge.

Said Phillips: "I eventually, very solemnly, with a little bit of malice in my voice, said, 'Ma'am with all due respect, you can go jump off a bridge.'"

Phillips says that since taking a stand he has been repeatedly called a "gay-wad" by other students, which he calls a "discriminatory name for homosexuals."