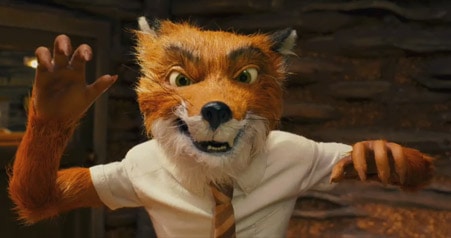 George Clooney is a fox. You knew this already but now he's actually playing one onscreen. Fantastic Mr. Fox is a sly one and that's a description that happily fits all: character, star and movie containing them. Mr. Fox is living a peaceful life as a newspaper columnist but he can't tame the wild animal within. Some of the funniest gags in the movie play off this discord between the tendency of animated films to anthropomorphize everything and the character's realizations that they aren't behaving like animals of their species would. Fox wants to go back to stealing chickens and when he moves to a new home with a window view of three massive farms (belonging to the villains Boggis, Bunce and Bean), he just can't resist. Even if you aren't at all familiar with the book, you know how complicated it gets in the movies whenever a charming criminal decides to do one last big job.

Roald Dahl's books have a rich history of onscreen adaptations from Gene Wilder and Johnny Depp's very different Willy Wonkas through Angelica Huston's sick transformation into the Grand High Witch in The Witches to the 90s animated version of James and the Giant Peach. Fantastic Mr. Fox is one of the most successful transitions, merging director Wes Anderson's emotional affect, fondness for diorama like production design, and symmetrical compositions with Dahl's whimsical storytelling and sometimes ghastly humor.

Meanwhile at the movies, how did Ben Foster get that scar by his eye?

There's no answer, AFTER THE JUMP… 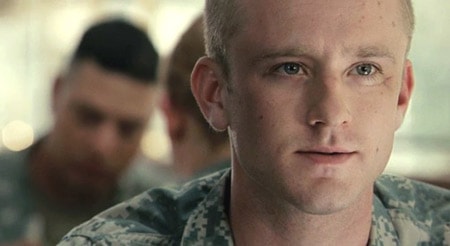 I don't remember if The Messenger specifically explains his injuries, but this new soldier drama gets considerable kick from his damaged eyes which the actor douses repeatedly with drops. He's too hardened from his tours of duty for actual tears so medicinally prescribed stand-ins will have to do. For now.

There have been so many war dramas over the years that it's rather shocking that filmmakers haven't really thought to explore the Army's Casualty Notification program prior to this. Kudos go out to writer Oren Moverman for exploring this hot button topic in his directorial debut. Casting Foster was a smart move, too. The actor has been playing mentally unbalanced and/or violent men for a few years now (Six Feet Under, 3:10 To Yuma, X-Men: Last Stand, 30 Days of Night among others…) but he gets a plum opportunity to modulate and spin those perceptions here. The Messenger usually transcends its acting vignette structure with good work from Foster, co-star Woody Harrelson and the typically riveting Samantha Morton as a newly widowed army wife. She doesn't take the news the way these soldiers expect. 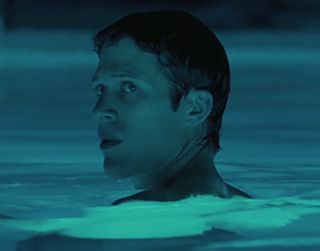 Have any movie-going plans this weekend? Maybe you're catching up Precious (reviewed last week)?

Previous Post: « Fundies: ‘Do Not Be Fooled’ by Gay-Friendly LDS Actions
Next Post: Watch: Short Documentary on Maine’s ‘No on 1’ Campaign »