The New York Post talked to the cabbie who kicked a gay couple out of his cab for hugging. He said he was afraid the couple was going to have sex. 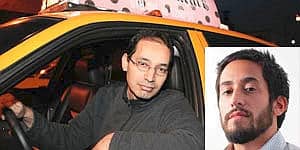 Said Medhat Mohamed: "I told them, 'OK, guys, if you want to stay away from each other,
I'm going to be very welcome to have you here and drive you to your
destination. They kept hugging and kissing. He was almost sitting on his lap. And I said, 'OK, guys, come on, I'm driving.' It doesn't matter to me if it's two guys
or a girl and a guy."

Mahmoud Elnefnawy, who runs the cab company, Astoria Express Management, defended his driver on the basis of religion: "in our religion, we can't handle that stuff. There's no kissing allowed in the cab. A man has to be a man."

Paul Bruno, the gay man who originally reported the incident, disputes Mohamed's version of events: "That never happened.  He never expressed an interest in our safety or the cab's safety at all."