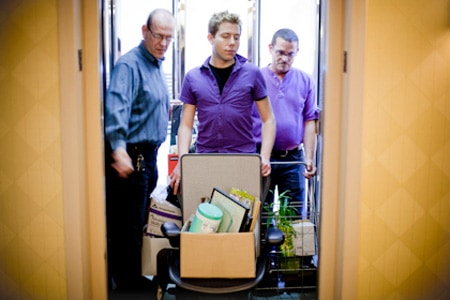 The Washington Blade, along with all of Window Media's publications including the Southern Voice, was shut down abruptly yesterday. Here are a number of updates, which include statements from the Blade's editor Kevin Naff about the new publication they're planning, and concern regarding the paper's archives, and questions about the closure that remain.

City Paper: "Robbie Barnett, one of the guys in the purple shirts, is back from unloading another dolly full of Blade leftovers. Barnett worked as the Blade’s distribution coordinator until this morning, when he walked into the office in the middle of the closure announcement. Barnett says the news came directly from COO Steve Myers and CFO Mike Kitchens. Myers is the one in the eye-patch, Barnett says: 'I think he might be ill or something.' Myers and Kitchens did most of the talking, Barnett says. 'None of us really said anything.' The atmosphere, he says, was just 'grim.'" 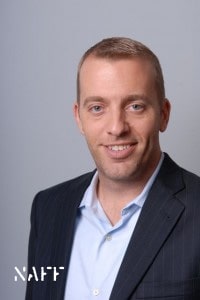 LGBT POV reports on the new venture reportedly rising from the Blade's ashes:

"Speaking as the former editor for the Washington Blade, Kevin Naff told LGBT POV that the staff arrived at the Blade offices in the National Press Club building to find two corporate officers waiting for them. They said the paper would be shut down immediately and Window Media was filing for Chapter 7, which is liquidation of all properties.

Naff s'aid: We all know there’ve been problems, but we didn’t expect the abrupt closure – and the Chapter 7. Maybe Chapter 11 [reorganization of the business] – but what can you say?'

Naff said the staff is 'united and all sticking together' and they will meet tomorrow to make plans for launching a new venture. Naff said: 'We hope to re-emerge as a new entity without all the Window Media baggage.'

Naff said he and Blade publisher Lynne Brown have already been discussing launching a new venture and believe they have funding. Naff said: 'We will re-emerge as a leaner, meaner operation without all the very expensive suite of offices. We’re going to shed some of that corporate trappings. And we will re-emerge as a leaner operation that will make money on day one.'

Naff said that the new venture would be both print and online and noted that the MSM Politico 'didn’t make money as an online news site only. They did a print edition and suddenly they were in the black.'

Naff said they would love to get an edition of the new venture out next week, but noted it’s a holi'day. We’re rather get it out sooner, rather than later. We’re not going to sit on our hands. That’s the goal.'" 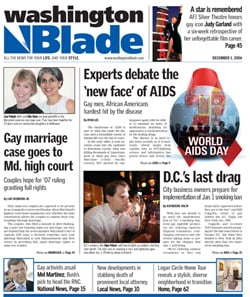 The future of the Blade's archives is unclear.

The Washington Post has a piece about the closing and the paper's history:

"A small troupe of activists founded the Blade in 1969, a few months
after New York City police raided the Stonewall Inn, a gay bar in
Greenwich Village, igniting riots and launching the gay rights
movement. In its infancy, the paper was known as the Gay Blade and
consisted of a single, letter-size sheet of paper that its editor,
Nancy Tucker, mimeographed and distributed herself, scooting around
town in a Volkswagen to drop off stacks at gay-friendly bars. The
paper's mission was to unite an eclectic array of gay groups, including
drag queens and government workers, literary buffs and motorcycle
enthusiasts; inform readers of gay-related services; and warn them
about blackmailers and other scammers."

The Small Business Administration is "remaining mum" on why it chose to shut down the Blade and the Southern Voice despite the fact that there appeared to be purchase offers on the table:

"The SBA shuttered all five publications on November 16. That day, the agency first agreed to make Tom Morris, director of SBA’s Office of Liquidation, available for an interview with Gay City News, but then canceled that and issued a statement.

“The SBA as receiver for Avalon does not anticipate any recovery on Avalon’s investment totaling more than $7 million in Window/ Unite Media,” the statement read.

The SBA did not respond to follow-up questions sent via email asking who made the offers, the nature of the offers, and why they were rejected.