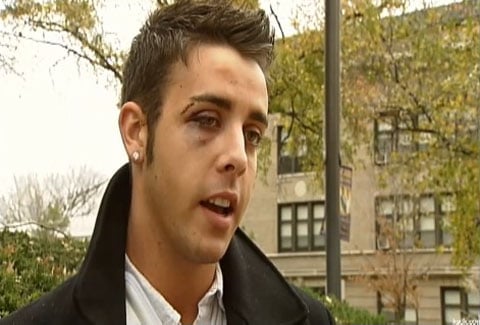 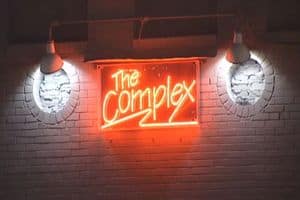 "Jacob Piwowarczyk says, 'I have a soft tissue bruise on my elbow. I have six stitches in my eye and I have a mild concussion.'These are the physical reminders, of a night Piwowarczyk won't soon forget. He and two friends were leaving the Complex Nightclub when it happened.Piwowarczyk says, 'They came up out of the car and they start calling us f*^%#.'He says there were four of them, men who had just left another bar that shares the parking lot.He says, 'We kept telling them please leave us alone, we're fine. From there, the one kid didn't like what we told them and decided to punch me in the eye and I fell to the ground. And at that time my friend was laying on the ground and they started kicking him in the face.'First security responded, then police. But by the time they arrived, the suspects were gone. Police say they are searching for the men and call this an on-going investigation.According to the victims, the suspects drove off in a black SUV with Illinois plates."

According to the Vital Voice, "Missouri was one of the first states to include both sexual orientationand gender identity protections in its 1999 Hate Crimes Law signed byGov. Mel Carnahan. The new Federal Hate Crimes Law, which was signed byPresident Obama in October, offers similar protections."

Watch a report and interview with Piwowarczyk, AFTER THE JUMP…

Previous Post: « Runoff Atlanta Mayoral Candidates Vie ‘to Prove Who’s Gayer’
Next Post: Ian McKellen Wants ‘the Only Gay in the Village’ to Tone It Down »