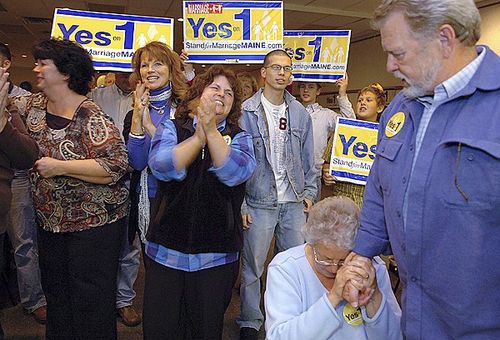 Check out this photo of the "Yes on 1" people rejoicing after taking marriage rights away from millions of Mainers.

Said Rev. Bob Emrich of Palmyra: "God has given us this victory and it is very
important for us to recognize that he is the one who put the energy
into this campaign. So let's not be so arrogant to forget this. It's
very appropriate to pause for a moment of prayer."

It never ceases to amaze me how people who profess to be Christian can be so un-Christlike.

The NYT on the loss:

"Maine became the 31st state to block same-sex marriage through a
public referendum, a result that will force supporters to rethink their
national strategy at a crucial time for the movement. With 84 percent
of precincts reporting early Wednesday, the repeal proposal had 53
percent of the vote, even though polls had indicated the race was a
dead heat.

This year three other states — Iowa, New Hampshire
and Vermont — joined Massachusetts and Connecticut in allowing same-sex
marriage, but only through court rulings and legislative action. Maine,
with its libertarian leanings, had seemed to offer an excellent chance
of reversing the long national trend of voters rejecting marriage
equality at the ballot box.

Some said the loss was a sign that
the state-by-state approach favored by the largest gay-rights groups
had failed and that the focus should move to reversing the federal ban
on same-sex marriage, which Congress can reverse without voter
approval. Others argued that the defeat only reinforced the need to
keep winning grassroots support.

Evan Wolfson, executive
director of the national gay-rights group Freedom to Marry, said the
loss in Maine underscores 'the fact that we need to continue those
conversations and make ourselves visible as families in communities.'

He added, 'It shows we have just not done it long enough and deep enough, even in a place like Maine.'

But
Maggie Gallagher, president of the National Organization for Marriage,
the conservative Christian group that is leading the charge against
same-sex marriage around the country, read the outcome differently.

'It
interrupts the story line that is being manufactured, that suggests the
culture has shifted on gay marriage and the fight is over,' she said. 'Maine is one of the most secular states in the nation, it’s socially
liberal, they had a three-year head start to build their organization
and they outspent us two to one. If they can’t win there, it really
does tell you the majority of Americans are not on board with this gay
marriage thing."'