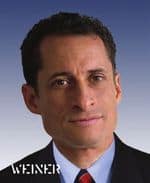 A White House official told Politico that Rep Anthony Weiner (D-NY) should have "manned up and run against Michael Bloomberg" in a defense against criticism that Obama had misjudged races around the country, particularly William Thompson's run against the NYC Mayor, offering only "lame words of praise."

John Aravosis notes the slur: "And if you don't think it's a slur against women or gays, then imagine
the White House saying that Barbara Boxer or Barney Frank need to 'man
up' – never gonna happen. It's a slur used against men who supposedly
act like women or homosexuals."

Previous Post: « ‘Yes on 1’ Pastor: ‘God has given us this victory and it is very important for us to recognize that he is the one who put the energy into this campaign.’
Next Post: Gay Couple Thrown Out of New York Taxi Cab for Hugging »