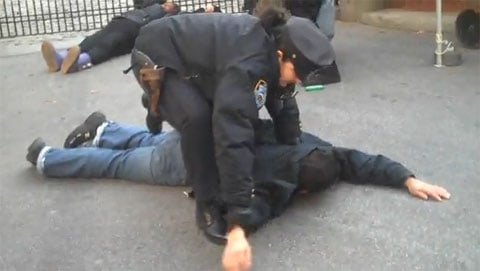 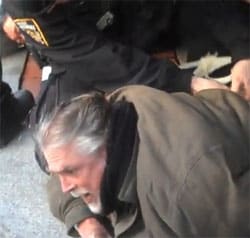 "To expose the hypocrisy of Mayor Bloomberg’s Annual World AIDS Day Breakfast at Gracie Mansion, ten Housing Works’ protesters, including President and CEO Charles King, staged a sit-in at the entrance to Gracie Mansion today. All ten were arrested while chanting 'People with AIDS under attack, what do we do? Act up, fight back!' 'Another World AIDS Day breakfast, another year of Bloomberg failing to address the needs of people living with HIV and AIDS,' said King before his arrest. 'We will not come here every December 1 and pretend that the Mayor cares about the well-being of New Yorkers living with HIV and AIDS until he proves it with his budget and his policies.'” Just after the arrest, some 50 people from the New York City AIDS Housing Network marched to Gracie Mansion and then harangued the mayor, chastising him for his opposition to 30 percent rent cap legislation for poor HIV-positive New Yorkers in supportive housing. Down at City Hall Park, hundreds gathered for Housing Works annual 24-hour World AIDS Day Vigil, where the names of people who have died of AIDS are read for 24 continuous hours."

Watch video of the arrests, AFTER THE JUMP…