In a new profile in Elle magazine, Glee's Matthew Morrison says that despite the fact he appears in gay magazines, is discussed on hook-up sites, and is in musical theater, he's not gay. 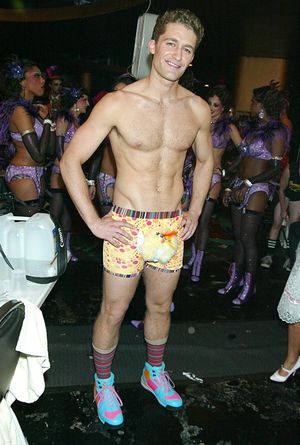 ELLE: So, Matt, you’re a musical theater star who’s been interviewed by The Advocate and much discussed on Manhunt.com, and you star in Glee, a program that’s referred to as “the gayest show on TV.” You must feel particularly proud being the first gay man to grace this page.

ELLE: I had indeed read in various places that you’re straight, but in light of the circumstantial evidence, I wasn’t sure.

MM: I grew up singing and dancing, so people have been calling me gay since fifth grade. I’ve heard everything you could possibly hear about it. But I do love gay people, so I’m not going to act like I was insulted or angry about it.

ELLE: But do you ever do anything to suppress your gayest traits? Like, on a club dance floor, will you keep a lid on your best moves in order not to look too much like Tommy Tune out there?

MM: Oh, yeah. I’ll do what I refer to as “the shoulder dance,” just, you know, move my shoulders and do a little head bobbing.

ELLE: What was the first moment you realized you were a heterosexual being?

MM: I was really sexual from an early age. My first kiss was actually with two girls at the same time. One girl would be behind the bush with me for a minute and the other girl would be timing us. Then they’d switch.