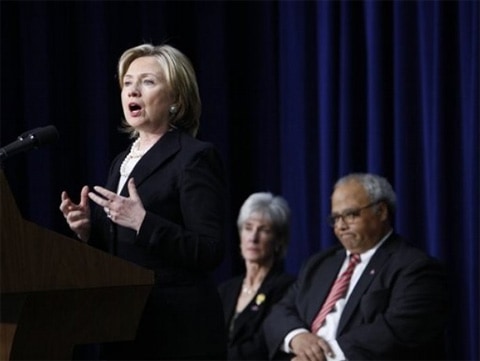 "Later this week, Ambassador Goosby will present the five-year strategy for the future of PEPFAR outlining the important role that PEPFAR will play in transitioning from emergency response to sustainable health systems that help meet the broad medical needs of people with HIV and the communities in which they live. In its next phase, PEPFAR programs will support a comprehensive, whole-of-government approach in many countries to increase awareness, reduce stigma, and get services to people at earlier stages.Obviously, our efforts are hampered whenever discrimination or marginalization of certain populations results in less effective outreach and treatment. So we will work not only to ensure access for all who need it, but also to combat discrimination more broadly. We have to stand against any efforts to marginalize and criminalize and penalize members of the LGBT community worldwide. It is an unacceptable step backwards on behalf of human rights. But it is also a step that undermines the effectiveness of efforts to fight the disease worldwide."

Clinton did not make any direct statements toward the unacceptable situation in Uganda, however.

She also announced that the U.S. would be "vigorously enforcing" the lifting of the "HIV Entry ban" for travelers with HIV/AIDS and some news as a result of it:

"Today, I am pleased to announce that, with the repeal of the ban, the International AIDS Society will hold the 2012 International AIDS Conference in Washington, D.C. (Applause.) This conference will draw together an estimated 30,000 researchers, scientists, policymakers, healthcare providers, activists, and others from around the world."

Read and watch video of Clinton's entire remarks, AFTER THE JUMP…

HILLARY CLINTON REMARKS on the ADMINISTRATIONS EFFORTS ON HIV/AIDS

As Valerie Jarrett leaves, I want to thank her for her leadership onthis and so many issues here in the White House and in theAdministration, and for her personal testimony as to the importance ofthis issue for her, for President Obama, for all of us.

Weare gathered on the eve of World AIDS Day to renew and recommitourselves. It is obvious to those sitting in this audience, as I lookout at you and see people who have been involved in this struggle for along time, that you know that we have made progress, but we face anunending pandemic, one that spares no one, that unfortunately,disproportionately affects the most vulnerable, and which is thedefining health challenge of our times. And we have to address itthrough a series of broad and cross-cutting global partnerships and awhole-of-government approach. And that is exactly what we areattempting to do.

We know the ravages and complexities ofHIV/AIDS here in our own country, and we know, many of us, what itlooks like around the world. But we can take some heart in the progressthat has been made over the last two decades. Access to antiretroviraltreatment in low- and middle-income countries has risen tenfold in thelast five years. New HIV infections have fallen by 17 percent over thelast eight years. And much of that progress has been due to theconcerted efforts of the United States Government and our partners.

Iwant to applaud President Bush for making a serious commitment toAmerican leadership in combating HIV/AIDS. His administrationspearheaded the creation of PEPFAR – the President’s Emergency Plan forAIDS Relief. And by supporting its implementation and activities, theUnited States has made the largest effort in history by any nation tocombat a single disease. I remember well serving as a senator from NewYork how there was bipartisan support on behalf of this initiative, andthe extraordinary commitment of dollars and technical assistance thatbacked it up.

PEPFAR has provided lifesavingantiretroviral treatment to over 2 million men, women, and childrenworldwide, through partnerships with other governments and NGOs. We’vesupported care for more than 10 million people, including 4 millionorphans and vulnerable children. And PEPFAR’s efforts to preventmother-to-child transmission have helped nearly 240,000 HIV-positivemothers give birth to children who are HIV-free. So it is clear thatour nation’s investments are having an impact. And President Obama isdedicated to enhancing America’s leadership in the fight against globalAIDS with PEPFAR serving as the cornerstone of our Global HealthInitiative to promote better and more sustainable health outcomes.

Laterthis week, Ambassador Goosby will present the five-year strategy forthe future of PEPFAR outlining the important role that PEPFAR will playin transitioning from emergency response to sustainable health systemsthat help meet the broad medical needs of people with HIV and thecommunities in which they live. In its next phase, PEPFAR programs willsupport a comprehensive, whole-of-government approach in many countriesto increase awareness, reduce stigma, and get services to people atearlier stages.

Obviously, our efforts are hamperedwhenever discrimination or marginalization of certain populationsresults in less effective outreach and treatment. So we will work notonly to ensure access for all who need it, but also to combatdiscrimination more broadly. We have to stand against any efforts tomarginalize and criminalize and penalize members of the LGBT communityworldwide. It is an unacceptable step backwards – (applause) – onbehalf of human rights. But it is also a step that undermines theeffectiveness of efforts to fight the disease worldwide.

Wewill also redouble our efforts to address the needs of women and girlswho are disproportionately affected by HIV/AIDS in many parts of theworld. Promoting the health of women strengthens families andcommunities and has positive spillover effects in areas like povertyreduction and education. Since we know the most effective healthprograms are integrated with functioning local and nationalgovernments, we will work with partner governments to assess capacity,identify gaps, and make customized plans to meet each country’s needs.

Now,that means creating more programs like the ones that Ambassador Goosbyand I visited in Africa over the summer. In Angola, for example, ourPEPFAR Partnership Framework supports the country’s HIV NationalStrategic plan to strengthen the health care infrastructure there.

Wevisited a clinic in South Africa, which we co-sponsor with the SouthAfrican Government, and heard from patients who not only receive carebut also support as they face the stigma associated with HIV and AIDS.

Ourinvestments in PEPFAR, the Global Fund, and overall global health havemade a positive difference. And we will continue our support, but wehave to do more. We have to make sure that our programs fosterconditions that improve people’s lives and, in turn, promote stability,prosperity, and security.

In this time of very tightbudgets in our own government and our own people suffering fromunemployment, from other kinds of cutbacks in services, we have to domore even here at home. We’ve seen some of the results of the cutbacksthat are happening at the state and local level. So while we aretalking about our commitment internationally, let’s not forget ourfellow citizens who are suffering right now.

And then wealso have to make the case to our fellow citizens that our investmentin dealing with the pandemic worldwide is in America’s interest. So weare committed to doing so. President Obama is implementing the repealof the “HIV entry ban,” a longstanding policy that prevented peopleliving with HIV/AIDS from entering our country. The repeal will takeeffect early in the new year, and will be vigorously enforcing it.

Today,I am pleased to announce that, with the repeal of the ban, theInternational AIDS Society will hold the 2012 International AIDSConference in Washington, D.C. (Applause.) This conference will drawtogether an estimated 30,000 researchers, scientists, policymakers,healthcare providers, activists, and others from around the world.

Soas we look to 2012, we have to continue to seek a global solution tothis global problem. On World AIDS Day, let us renew our commitment toensuring that those infected and affected by HIV—the woman on treatmentwho is supporting her family, the child who dropped out of school tocare for sick parents, the doctors and nurses without adequateresources— that all those who have joined together to fight thispandemic will someday live in a world where HIV/AIDS can be preventedand treated as a disease of the past.

Thank you all very much. (Applause.)