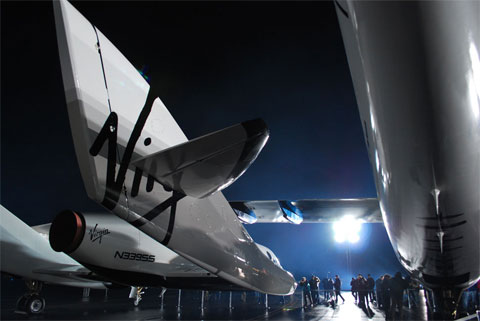 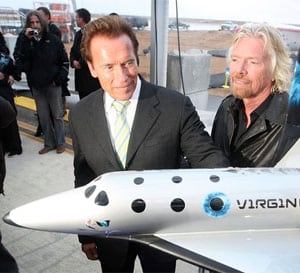 "As Britain's most visible showman-entrepreneur unveiled his latest creation in the southern California desert last night – a giant fantasy of a flying machine that promises to take tourists out of the Earth's atmosphere into outer space as soon as 2011 – everything was in place for the aviation equivalent of a glitzy Hollywood premiere.Branson had the klieg lights, the sound system booming eerie space-age music, and the hospitality tents doling out free champagne and vodka cocktails right on the runway of the Mojave air and space port.He even had "celebrity" guests – everyone from Victoria Principal, of Dallas fame, to Arnold Schwarzenegger, the governor of California – and countless stunning young women draped across the arms of tech geeks, engineering whizzes and assorted zillionaires, some of whom had flown halfway across the world to watch a little piece of history in the making."

BoingBoing (top image) has a gallery.

Check out video of the unveiling, and a very cool video demonstrating what a flight in SpaceShipTwo might be like, AFTER THE JUMP... 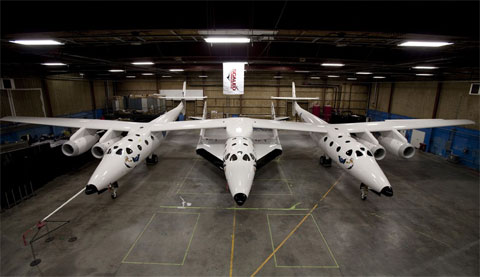 Simulated animation of SpaceShipTwo in action: