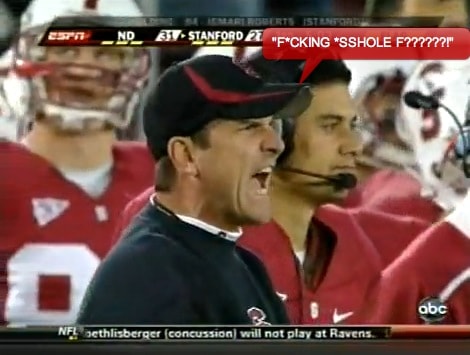 Stanford football coach Jim Harbaugh denied using the word "faggot" on the field during a Notre Dame game on Saturday.

Harbaugh talked to GLAAD: "Harbaugh called back to personally state he never said the word 'f***ot.' He said, 'It did not come out of my mouth. It would not come out of my mouth. It’s not in my heart to ever say that.' Harbaugh acknowledged that he did curse but did not say an anti-gay slur. After discussing the need to create safe spaces for both LGBTathletes and for athletes who have LGBT friends and family members,Harbaugh said the university would be releasing a statement denouncingthe video."

Harbaugh's official statement: “I would like to state unequivocally the alleged anti-gay remark thatsome have attributed to me did not come from my mouth and any suchassertion is hurtful to me, members of my family and the gay community. Those who know me know I never use slurs under any circumstances; thebias reflected by spiteful slurs is simply not in my heart.”

Read his lips. What do you think he said?

Previous Post: « Yalies of the Day
Next Post: Portia de Rossi: Civil Unions Vs Marriage on The View »