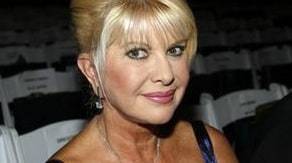 "Police say Ivana Trump has been escorted off a plane in Florida after she became belligerent when children were running and screaming in the aisles.

Authorities say the first ex-wife of billionaire Donald Trump cussed at the children Saturday, and when flight attendants on the New York-bound plane tried to calm her, she became even more aggravated…She has not been charged in the incident at Palm Beach International Airport.

Palm Beach County sheriff's deputies asked Trump to voluntarily exit the plane, but they said she refused. She was then escorted off."